Cllr. Kim Fletcher lists the infrastructure needed in the parish in light of new development – what else do you want to see?

The need for water, drainage, power, internet and services, such as GPs, a pharmacy and shops, is a given for modern communities.

However, the sudden building programme TWBC has planned for the parish will stress our existing infrastructure, so the NDP is working to minimise this.

A new multi GP surgery is planned on Wilkes Field, alongside an improved public space in the Crane Valley and a community centre.

New cycle and footpaths are planned to improve the links from the outskirts of the parish to the centre, without resorting to a car.

Increased local parking off Angley Road is planned with improved footpaths to the town centre and schools.

The High Weald Academy has been rebuilt ready for more pupils from a wider area. 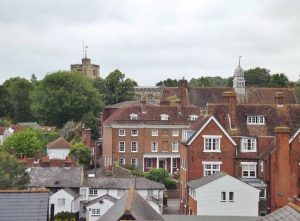 The lack of employment and business opportunity land remains a big concern, as domestic land is more valuable than commercial sites.

Drainage in the Crane Valley, the potential for flooding and the capacity of the sewage works are issues taken up with the Environment Agency.

We need your views on other infrastructure that may need improving.